Create an Account - Increase your productivity, customize your experience, and engage in information you care about.

The Winona County Sheriff's Office would like to introduce our K9 Partner Cleo. She is a Belgian Malinois and was born at the Winnipeg Police Department in Winnipeg Canada in 2011. She was purchased for $20,000 solely by donations from businesses and individuals and was trained by Jeff Ellis. She works her shifts with K9 handler Deputy Carlson and is certified in tracking, suspect search, article search, obedience, agility, apprehension, apprehension with gunfire, and handler protection. She is also certified in narcotics which includes numerous odors of different narcotics. Her badge number is 519 and she is always ready to work and on-call 24/7. 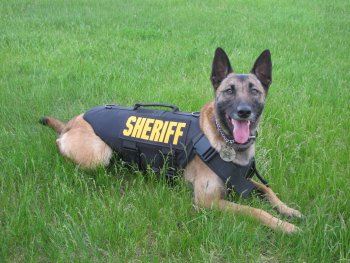 Vested Interest in K9s, Inc. is a 501c (3) charity located in East Taunton, MA, whose mission is to provide bullet and stab protective vests and other assistance to dogs of law enforcement and related agencies throughout the United States. The non-profit is pleased to announce a pilot program that will donate $10,000 toward a medical reimbursement program for self-funded K9 units.

The "Healthcare for K9 Heroes" grant will be awarded to departments who have the financial burden of raising funds to support their K9 unit, who have no more than three K9s, and who have previously been awarded a vest through Vested Interest in K9s, Inc. Law enforcement dogs ages two through seven will be eligible. The medical reimbursement insurance policy will cover injury sustained in the line of duty, illness, diagnostic testing and therapies.

Selected as the first five recipients are:

The program will be administered by Veterinary Pet Insurance Co (VPI). VPI is a member of the Nationwide family of companies and is the first and largest pet health insurance company in the United States.

The Vested Interest in K9s, Inc. grant will allow for the provision of a VPI Major Medical Plan at the cost of approximately $500 per policy, per year. The plan allows the freedom to use any licensed veterinarian in the world including specialists and emergency care providers.

VPI recognizes the contributions of all working dogs and has a 34-year track record of providing coverage for these courageous canines. As a thank you for the service provided by our four-legged heroes, VPI offers a discount on medical coverage for police, narcotic, explosives, and search and rescue dogs. VPI currently insures active police dogs across the nation and has provided coverage for 9/11 search and rescue dogs who so bravely served our country in the wake of a national tragedy.

In addition to the launch of the new healthcare reimbursement program, the non-profit has provided over 1700 law enforcement dogs with bullet and stab protective vests in 49 states, at a cost of 1.6 million dollars. For more information, please call 508-824-6978. Tax-deductible donations are accepted through the Vested Interest in K9s website or via mail to:
Vested Interest in K9s, Inc.
P.O. Box 9
East Taunton, MA 02718